This post was written during the progress of making these dishes, and so the tenses and times of the various recipes and commentary may reflect a sort of wibbly-wobbly, timey-wimey approach. Please excuse that, and do not let it hamper your appreciation.

For the Victorian Day Picnic Luncheon I am making two meat items, chicken pie and roast beef. I've spent most of the afternoon shopping and preparing these two items, mostly the chicken pie.

I've been somewhat closely following a recipe from Buckeye Cookery for the chicken pie:


Cut up two young chickens, place in hot water enough to cover, boil until tender; line a four or five quart pan with a rich baking-powder or soda-biscuit dough quarter of an inch thick, put in part of chicken, season with salt, pepper and butter, lay in a few thin strips or squares of dough, add the rest of chicken and season as before; some add five or six fresh eggs or a few new potatoes in their season; season liquor in which the chickens were boiled with butter, salt, and pepper, add a part of it to the pie, cover with crust a quarter of an inch thick, with a hole in the center the size of a tea-cup. Keep adding the chicken-liquor and hot water if needed, since the fault of most chicken pies is that they are too dry. There can scarcely be too much gravy. Bake one hour in a moderate oven, having the heat turned to the bottom, as great care is necessary to have the bottom crust well baked.


I have modified the recipe thus:

1. Make the Crust first, because it requires some resting time. Sift the salt, baking powder, and flour together, add the thyme and sage, and the butter. Mix with a paddle in a stand mixer, or by hand with a pastry blender, or with your hands (pinching the fat between your fingers) until the butter is in small pieces, sort of like pie dough, about the size of corn kernels. Add the milk, and mix just until the dough comes together. Form the dough roughly into a loaf shape, and wrap it tightly in plastic wrap.

3. Place the chicken pieces in a large pot, cover them with ample water, add the salt, peppercorns, and thyme, and bring the whole to a boil. Reduce to a brisk simmer and cook until the chicken is tender and cooked through all the way. Remove the chicken from the pot, and strain the cooking liquid.

4. Cool the chicken, remove the skin and bones, and chop it into bite-sized pieces. Combine the chicken with the peas, potatoes, scallions, and herbs. Season lightly with salt and pepper. Somewhere around here, preheat an oven to 400°F.

5. Return the cooking liquid to a boil. Prepare the roux (melt the butter, add the flour, and cook until it foams lightly.) Add to the boiling liquor, and whisk vigorously to prevent clumps from forming.

6. Assemble the pie! Roll out two pieces of the crust dough 1/4 inch thick (1/2 cm) to fit your pie pans. Put your bottom crust in the pans, gently lowering the dough in to avoid stretching or breaking it. Pile in the filling, as much as will fit, and then top with another crust. Cut a hole about 2 inches in diameter in the top. Crimp the edges, and pour the gravy into the pie. Fill it as full as will hold, and place the pie in the oven. Bake until the crust is browned and delicious, and cooked through. It took my pies about 45 minutes, give or take, to get done, with a slightly wavering oven temperature.

...on an inspection, the bottom crust on these pies seems to have baked somewhat incompletely. I think that a blind-bake might be worthwhile, but what I've done is removed the pies from their pans, placed them on sheet trays, and I'm going to try baking them for a bit longer. Fingers crossed!

...that was not a good decision. Bake them about 45 minutes in a 400°F oven, and leave it at that. Don't push your luck, structural integrity does not seem to be a selling point for this dish the way I've made it. I think that blind-baking the bottom crust may be the best way to go about this. I'll experiment and update you eventually. In the mean time, this is actually a pretty good result, albeit not perfect.

Blind baking the crust is good, as is making it with regular pie dough—or, just bake it until it looks done, chill it, and hope for the best. I'll revisit this recipe later. 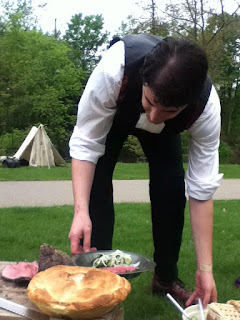 
1. Place the roast in a container large enough to hold it and a quantity of liquid. Throw in a healthy pinch of salt (maybe 1 1/2 tsp) and a few grinds of pepper, and pour in the red wine. If the wine does not fully cover the beef, add some water to bring the liquid level up. Chill overnight in the fridge.

2. Purée rosemary, garlic, olive oil, salt, and pepper together until smooth. The amount of olive oil you need will vary, but your goal is to get a smooth paste.

3. Remove the beef from the wine, and pat it dry. Rub the rosemary/garlic paste over the beef, and allow it to sit for an hour. Preheat oven to 250°F.

4. Heat a cast-iron pan large enough to hold the roast over high heat on the stove. Add a small splash of oil to the pan, and begin searing the roast on all sides until it's nice and browned, starting to crisp up a bit. When all sides have been seared, place the roast on a roasting pan and place in oven until it measures 115°F in the center. Remove from the oven, tent with aluminum foil, and rest. When cool enough to handle, place the roast in a container and refrigerate until ready to slice and serve.
Posted by Aaron at 1:08 PM