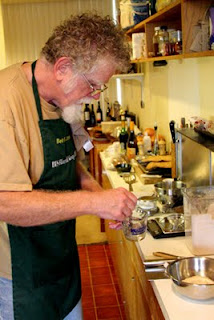 It's The Bread Guy.

Aaron asked me to put in another appearance, so I thought I'd tell you about my latest foray into the world of dough. As some of you may know, it's Passover, which gave us the opportunity to get together with the family to celebrate the Seder. This ritual has many symbolic components, recounting the history of the liberation of the Israelites from slavery in ancient Egypt. So, how does this relate to The Bread Guy? Well, there's special bread, which is part of the Passover meal—matzah. The biblical narrative tells of the haste of the flight of the Israelites, such that they could not even wait for their bread to rise, resulting in an unleavened flatbread or cracker that we know as matza. It symbolizes freedom and redemption, but as the "poor man's bread," it is also a reminder of the humility of servitude. 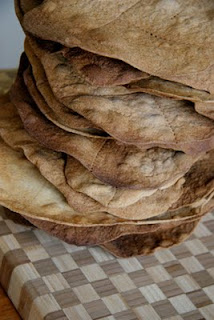 So why does this interest The Bread Guy? Well, my recent bread baking efforts have explored the enrichment of flavor that various methods of pre-fermentation add to breads. (You remember the 12 to 16 hour poolish used in the Pain Rustique.) And in particular, how these techniques can be applied to whole grain loaves. Well, matzoh is the complete antithesis. The religious elders determined that the time it takes for wild yeast to start its fermentation action is 18 minutes. During Passover, eating chametz (any food which is leavened) is forbidden. So, for matse to be kosher for Passover, it needs to be prepared in less than these 18 minutes. That is from the time the water is mixed in with the flour until the dough is baked in the oven.

Well, I considered this a challenge and decided I'd try my hand at preparing the matso for the family, and I have to say, I was able to modify the recipe that I used and meet the time limit. Actually, it worked quite well, the matzho that was baking was done just as the next batch was ready to put in.

To give credit where credit is due, this recipe can be found in a great bread book- Peter Reinhart's Whole Grain Breads. What I thought I'd do is pass along the original recipe, and then tell you the changes that I made to meet the time limit.

Preheat the oven to 350 degrees with a baking stone in place (you can use an inverted sheet pan if you don't have a stone).

Combine flour, salt and water in a bowl and mix to form coarse dough. Transfer to a lightly floured work surface, dust with more flour, and knead for three minutes. Dough should be firm and tacky, but not sticky. (You can see in the photo that the dough does look pretty shaggy when first turned out of the bowl. But, it comes together quite well after the three minutes of kneading.)

Let the dough rest three minutes, then knead for an additional minute, adjusting flour or water as needed to produce dough that is "soft and satiny, not sticky, and only a little tacky." I have to tell you, the three minute rest does do the dough a world of good- it feels great, just as described, smooth and just a little tacky.

Divide the dough into 8 to 10 pieces, round each into a tight ball, and let them rest for three minutes.

Using minimal flour, roll out each piece of dough into a disk or rectangle, until it begins to shrink back. Dust with flour if you need to stack them.

Return to the first piece, start from the center and roll into a disk or rectangle 1/8 inch thick, dusting the bench only if necessary.

Lightly flour a peel (or underside of a sheet pan), and transfer the first piece to the peel. Dock the entire surface and slide from the peel onto the baking stone.

Bake until the motsa turns a rich brown- 8 to 15 minutes depending on thickness.

Remove to a cooling rack, and continue baking the remaining pieces of dough, rolling out the next while the previous is baking.

The motso should be crisp and snap easily after it cools.

So, as you can figure out from looking at the recipe, if you have 8 to 10 pieces of dough, and each one takes 8 to 15 minutes to bake, and a train traveling at 80 miles per hour leaves Philadelphia at...? Sorry… I got sidetracked.


Anyway, with that many pieces of dough, and only one stone to use, the 18-minute production limit didn't seem feasible. So this is where I made the first modifications. I have both a hearthstone and a pizza stone, so I separated the shelves in the oven far enough to give me room to work with a peel, and preheated the oven to 400 degrees with both stones in place. Next, I decided to cut down on the amount of dough mixed at one time, halving the amounts of flour and water called for in the recipe. I actually increased the amount of salt by 50%, however. So for my version of the recipe, the ingredient list is:
114 grams (~7/8 cups) whole-wheat flour
3 grams (~3/8 teaspoon) salt
85 grams (~3/8 cup) water
Extra whole-wheat flour for adjustments

I also decided to make the motza larger, so that I would only have to bake two at a time, (two stones, two mazzot). You can get an idea of their size by looking at the photos of me moving them from the bench to the peel. Which brings me to the next issue. I wanted to make sure that the matzo would break evenly and not just crumble to pieces when snapped. So after rolling out the dough and docking it with a fork, (I don't own a docking wheel yet), I made perforations in the dough with a pizza cutter. Then I transferred the rolled out dough to an unfloured peel and slid it into the oven.

So you can see from the photos, I took the suggestion of using minimal flour for the process of rolling out the dough literally. When I first tried this recipe, I had a more liberal hand. But the extra, raw flour that ended up on the matzot detracted from the flavor and enjoyment of eating them. So with this attempt I went to the opposite extreme, using as little as possible on the bench, peel, or rolling pin. This meant that I had to lift the dough off the bench and reposition it a few times while rolling it out, until I got it to the thickness that I wanted. When I say "lift it off", it was sticking and would only roll out so far. Repositioning it allowed for further expansion. I was careful in releasing it from the bench so none of the pieces ripped, and in fact, peeling it off as I did helped to thin it out a little bit more. You can see from the photo how tacky the dough was.

I was pleased with the results of my efforts. The matsoth were satisfyingly crunchy, with a whole grain, nutty taste, which went well with the horseradish and charoset at the Seder meal.

OK! So by now you may have noticed all of the different spelling for matzot. Well, none of them are wrong. Since the word is a transliteration from Hebrew, there's actually no "approved" spelling or pronunciation. All of the different versions used in this blurb are listed in the Oxford English Dictionary, Second Edition.

Try the recipe. I think you’ll like it. I did, and I hope the family did as well.