A Picnic! (Part One of Two)

This past Saturday saw the much-needed trip to an event in my area, Grand Ledge Victorian Day. It is an incredibly enjoyable event, featuring croquet, Civil War reenactments, a low tea, quilts, antiques, a parade, a beard and mustache contest, and educational programming about the Victorian era. In particular, my friends and I (a motley group including Miss Kagashi of The Steamer's Trunk and our various associates, some from the Imperial Anti-Piracy Squadron) have established a tradition (which I have taken to calling "The First Manassas/First Bull Run Memorial Picnic" in homage to that battle) of picnicking during the Civil War skirmish. This year, Miss Kagashi and I coordinated ourselves to prepare some picnic items from the book Buckeye Cookery and Practical Housekeeping, which says:


The following bills of fare may be picked to pieces and recombined to suit tastes and occasions:

We set upon having a somewhat simpler picnic, not using everything off that list, and designed the following list of provisions, which we believed would suffice: 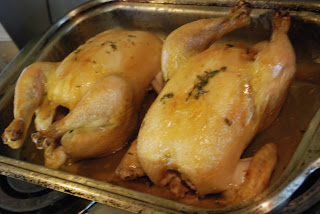 For the meal, I am providing the items marked with an asterisk.

The Cold Roast Chicken was made from a very simple recipe:

2. Dry the chicken well. Don't let it be wet or frozen, for this will steam the meat, and that is undesirable.

3. Truss the chicken by looping a string around the pope's nose (that's the chicken's tail area) and each end around one of the legs. Tie tightly. Sprinkle well with salt, and place in a roasting pan.

5. Remove the chicken from the oven. Strip the fresh thyme leaves over it, baste with the juices, and cover with aluminum foil for 5-10 minutes. This will infuse the flavor of the thyme into the meat. Trust me, it's delicious.

6. Allow to cool, and refrigerate until use; alternatively, carve while warm and store, refrigerated, until consumption. Eat with mustard.

I also found a Capon while out marketing. I treated it exactly the same as the broiler chickens, but with the following change: Before trussing I threw a handful of garlic cloves—maybe about 8—and two sprigs of fresh rosemary into the bird's cavity. The capon, being larger, will take longer to roast, however; perhaps 50 minutes or an hour.

A capon is a castrated rooster; as such, it has a much greater amount of breast meat at an earlier age than a normal rooster would; they're a little bit more expensive than a normal broiler/fryer chicken, but their meat is richer and more flavorful, and they're just fun to tell people about.

The pickles for this picnic came out of my cupboard. They were made last summer (or was it the summer before?) from Israeli cucumbers, and roughly followed a recipe from Country Wisdom & Know-How, a title that sounds Victorian but is actually from the 1960s. It was originally a series of pamphlets designed for those hippies who were going off the grid and starting farms and communes... not all of its information is great, but much of its cooking section is useful, in that it presents simple recipes that are relatively timeless.

Into each hot, sterilized quart jar, put 1 bay leaf, a piece of garlic clove, and a piece of fresh dill. Pack with cucumbers. Top each jar with 1 bay leaf, 1 garlic clove, and 1 dill head. Fill with the hot liquid, leaving 1/4 inch headspace. Seal. Submerge in a boiling-water bath for 10 minutes. Turn heat off when all jars are in the canner. Be sure jars are covered with boiling water. Remove at once when 10 minutes are up. Or process in a steam canner for 10 minutes. Ready to eat in 2-3 weeks.

The zucchini relish is a recipe from the Ball Blue Book of Preserving. A couple summers ago, we got a pair of absolutely giant zucchini from a Community-Supported Agriculture farm that my family was part of. Lacking anything to do on a summer Wednesday, let alone something to do with about 3 lbs of zucchini, I cracked open my cookbooks and made this recipe. It's been hard to get rid of, as I'm not really sure what to do with it, but it doesn't taste bad at all.

Yield, about 4 half-pints (I packed it in jelly jars.)

Tune in next time for a discussion of mustard!
Posted by Aaron at 10:00 AM