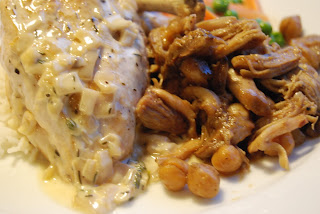 Thighs! The mere word sends shivers up the spine. Chicken thighs, however, are a little less titillating, and a little more hunger-stimulating.

This recipe developed as a way to use the thighs from the chicken I broke down during my practice for my Practical Exam earlier this year. When you create the finished plate for that exam, you're expected to use the chicken breasts, and are not required to use any other part of the bird for any reason. I suppose you could, but there's no real requirement.

Anyhow, having had the recent experience of the Classical Restaurant class, and thinking of ways to put more than one protein item on a plate, I came up with this as a little side dish for the home version of my plate—something I'd do here, and not replicate at school unless I had a whole boatload of free time. From there, however, it spiraled into something my mother liked, and that I ended up serving at a local underground restaurant event.

This truly was a case of what the bread guy likes to call "a stroll through the fridge," meaning that I just sort of put into the dish what I saw that we had on hand, and what sounded good to me.

I started with the chicken thighs, of course. Seasoning both sides with salt and pepper, and then searing them in a hot sautoir with 100% olive oil.

Once they were nicely seared on both sides, I removed them from the sautoir and put in one large onion that I'd diced up (later editions of this dish have seen it be a julienne cut.) I added a little extra oil to help them cook cleanly, and caramelized them. When they were about half-way there, I added garlic to the onions. As they cooked, I also added salt, pepper, cinnamon, allspice, coriander, and both hot and sweet paprika, as well as a few red pepper flakes. I cooked the spices in with the onions, added chicken stock to deglaze the pan, and then returned my partly-cooked chicken thighs to the pan. I covered the pan and let them simmer for about 30 minutes, until they were thoroughly cooked. I then pulled them out and removed the bones, and then tore up the meat into a pulled chicken sort of state, after which I returned the meat to the pan, along with one half-can of chick peas, drained of the canning liquor. A stir, a test of seasonings, and a short simmer uncovered to reduce down the liquid later, and I had a dish that I was happy to serve.

When I have done this dish since, I've served it over boiled rice, which I've made with the addition of some Lapsang Souchong tea. It takes on a nice smoky flavor, and counterposes the heat and spicy richness of the chicken braise very nicely.

1. Salt and Pepper chicken thighs; sear in olive oil. Set aside.
2. Caramelize onions, add garlic; sauté and add spices. When aromatic, deglaze with chicken stock.
3. Bring to a simmer, return meat to pan. Cook until done.
4. Remove meat, shred, return to pan. Add garbanzo beans, and cook uncovered until the liquid is reduced to a glaze.
5. Serve over rice cooked with Lapsang Souchong tea.
Posted by Aaron at 10:00 AM