Passover is a long holiday—eight days, to be exact—and so I have returned to complete my task. When last we met, I discussed the traditional table items for a passover meal; in this, the second part of my little discussion of Jewish passover tradition, I shall take on the passover meal itself, and elaborate on some of the varieties of food found in the Steampunk era. It will begin, with my apologies, in a somewhat scholarly manner, examining the sources I have used to create this pair of articles; I shall quickly proceed to a lesson on the origins of the dietary restrictions surrounding Passover, and finish with a discussion of dishes typical to a seder in the age of steam. As of this time, I have not prepared many of the dishes in my usual manner, and as such will present recipes from the primary sources without editing; it is a goal, however, to prepare some of them for my more typical posting style shortly. (Kosher for Passover food goes on sale after passover is over...)

For this post, I have relied heavily on two cookbooks. First is The International Jewish Cook Book: 1600 Recipes According To The Jewish Dietary Laws With The Rules For Kashering: The Favorite Recipes Of America, Austria, Germany, Russia, France, Poland, Roumania, [Etc., Etc.] By Florence Kreisler Greenbaum, in its second edition from 1919 (originally published in 1918;) secondly, Aunt Babette's Cook Book, in its eleventh edition from c. 1889. Notably absent from my collection is Mrs. Esther Levy's Jewish Cookery Book - on Principles of Economy Adapted for Jewish Housekeepers with Medicinal Recipes and Other Valuable Information Relative to Housekeeping and Domestic Management, which is the purview of my friend over at The Boychik Balabusta. Sadly, the item is only available in print, and I have not (as yet) put my hands on it. I am informed, however, that Mrs. Levy doesn't have a section for Passover, but rather has recipes sprinkled throughout the book that are noted as being Kosher for Passover.

It is interesting that, while several other cookbooks treating on Jewish food (in part or wholly) are available from the same time period, none of them set aside a separate portion of the book for Passover recipes. Also worth noting is that both of the books I have uncovered in my research were published by the Bloch publishing house, and both include the same exact passage describing the seder plate (as quoted in the previous entry on Passover:)


Set the table as usual, have everything fresh and clean; a wineglass for each person, and an extra one placed near the platter of the man who conducts the seder. Then get a large napkin; fold it into four parts, set it on a plate, and in each fold put a perfect matzoh; that is, one that is not broken or unshapely; in short, one without a blemish. Then place the following articles on a platter: One hard-boiled egg, a lamb[*] bone that has been roasted in ashes, the top of a nice stick of horse-radish (it must be fresh and green), a bunch of nice curly parsley and some bitter herb (the Germans call it lattig), and, also, a small vessel filled with salt water. Next to this platter place a small bowl filled with כרוסת [charoses] prepared as follows: Pare and chop up a few apples, add sugar, cinnamon, pounded almonds, some white wine and grated lemon peel, and mix thoroughly.

Thirty years separate the specific editions in question; I am sure that more separate the origin of that paragraph and these printings. It seems evident that the cookbooks published by this particular publishing house followed a similar formula for their chapter order and names (both Passover chapters are subtitled, "Cakes, Puddings, Sauces, Wines, Etc.", and follow the chapter on Beverages.) What can be assumed, however, is that if the specifics of a seder plate did not change enough between 1889 and 1919 to merit a significant editing of the exact language of this description. The only change, as marked by the asterisk in the excerpt, is that "lamb" was added as a descriptor of the bone in the later cookbook.

The origins of Passover prohibitions come from the story of the holiday, as discussed in the previous entry:


And this day shall become a memorial for you, and you shall observe it as a festival for the lord, for your generations, as an eternal decree shall you observe it. For seven days you shall eat unleavened bread, but on the first day you shall remove the leaven from your homes ... you shall guard the unleavened bread, because on this very day I will take you out of the land of Egypt; you shall observe this day for your generations as an eternal decree.

The further rules about leavened items and grains are explained very well at the Wikipedia article on chametz. The condensed version, more or less, is that the minute that flour from the five grains:

touches water, they become leavened and may no longer be consumed. This means that many of the traditional dishes (dumplings, breads, etc.) cannot be used, but there are a great deal of secondary items that cannot be used either—beer, breadcrumbs, roux, pasta...

Onward to recipes, then. In large part, the goal of any cookbook presenting Passover recipes is to present alternatives to any recipe that would normally include one of the five grains prohibited on passover (for their potential to leaven and therefore ruin the feast of unleavened bread.) Thus, puddings, cakes, breads, and many other dishes are replaced, while soups, roasts, and other main dishes (that don't include the said prohibited items) usually remain mostly unchanged. 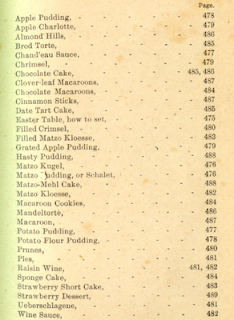 Aunt Babette's book is useful, in that she presents a table of contents for her Passover section, called "Easter Dishes." It is appended here. Obviously, the focus here is replacing items that would normally be made with flour (puddings, cakes,) but there are also items that are unique to passover, which make use of various forms of matzo.

The "Chand'eau Sauce" recipe is of particular interest to me, as it provides a recipe for a thickened sauce that does not violate the passover laws; potato flour is used in place of regular flour to create a rich (eggs are included) white-wine flavored sauce to serve with the Matzo Pudding ("Schalet") that is also detailed in the section. Potato Flour Pudding, as well as apple puddings containing matzo flour, are also described.

Most of the recipes in this section are, however, unique to matzo: chrimsel and kloesse are both preparations of matzo that are known and individually extant, not a substitution for flour in some other dish.

Of particular note is a Strawberry Short Cake recipe (which I intend to experiment with.) It goes as such:


Beat the [yolks] and whites of four eggs together with a scant teacupful of sugar, a punch of salt, and the grated peel of a lemon. Beat until the consistency of a thick batter, add last about three-quarters of a cup of matzo flour. Bake in two layers. Pick strawberries, cut them in halves, sugar liberally, fill each layer (this makes two cakes); whip some very rich cream, sweeten and spread on top of the cakes.

There is also a Sponge Cake that I would like to try:


Beat eight eggs very light with two small teacupfuls of sugar, a punch of salt and grated peel of a lemon. Beat until the consistency of a very thick batter, sift a small cup and a half of matzos flour as fine as possible, add the grated peel and juice of a lemon and bake in a moderate oven.

Matzo flour is a cooked product, made from pulverized, baked matzos. It is somewhat equivalent in nature to breadcrumbs. The recipes both make use of eggs and sugar for the majority of their structural components, using the matzo flour to augment it. (Normally, the cake flour would form a small amount of gluten, trapping the leavening gasses... but we can't leaven flour for passover.)

In 1919, the recipes look remarkably similar. Compare the recipes from each book for Matzo Kleis (Kloesse), which are now known commonly as Matzo Balls.


Soak some matzos about half an hour, and press out all the water. Heat some goose oil in a spider [a cast iron fry-pan]; cut up part of an onion very fine, heat it with the goose oil, and dry the matzos in it. Put the matzos in a bowl; break in five or six eggs, a large handful of matzo flour, some salt and grated nutmeg and a little ground ginger. Mix this thoroughly into the dough. Grease your hands, and form into little balls the size of marbles. You can make enough at once to last a few days. Keep in an ice-chest. Another way is to use all matzo flour, moistening the flour with scalding soup stock and proceed as above. These are very nice for soups.


Soak four matzoth in cold water and press them after being thoroughly saturated. Add little pepper, salt, sugar, parsley, and half an onion chopped fine, first browning the onion. Beat four eggs and add all together. Then put in enough matzoth meal that it may be rolled into balls. The less meal used, the lighter will be the balls. They should boil for twenty minutes before serving.

A second recipe is much the same:


Take six matzoth, three eggs, two cooking spoons of chicken fat, parsley, onion, salt, pepper and ginger. Soak the matzoth in boiling water a minute, then drain every drop of water out of them. Press through a sieve. Fry about three onions in the two tablespoons of chicken fat, and when a light brown, put the matzoth in a spider with the fat and onions to dry them. Add one teaspoon of salt, dash of pepper and ginger and one tablespoon of chopped parsley. Add the three yolks of eggs and beat all this together a few minutes; last, add the well-beaten whites. Form into balls by rolling into a little matzoth meal. Drop in boiling salt water and boil fifteen minutes.

In 1919, there are also two recipes for making Matzoth Kleis from Matzoth Meal, both of which involve a similar process of adding eggs, fat and seasoning to matzo meal. This is more or less where our modern matzo ball comes from, with the addition of some baking soda to give it a little more fluffiness (a more modern taste.) Regardless, however, the process changed slightly over the years, but nothing substantial about the recipe did until very recently.

A Passover meal of the Age of Steam resembles most other meals from the time, much as a modern Passover meal resembles modern dinners; Vegetables, starches, and a roast or braised joint of meat would be served as a main course, along with a first course and a soup of some kind. A salad might make an appearance, and additional courses as well—depending on the wealth of the family hosting the meal.
Posted by Aaron at 11:01 PM