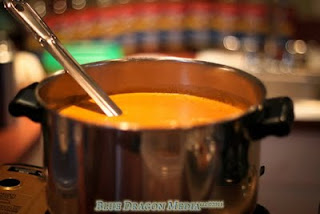 Bisques are traditionally a French soup made from crustacean shells. They are smooth, creamy, and highly seasoned. Typically, you lightly cook the shells to develop a rosy color, then simmer them with wine and other aromatic spices; they are strained out, ground, and the soup is thickened with a combination of the ground crustacean shells and roux or rice, leaving a smooth, creamy, and delightful dish.

Being as I am allergic to crustaceans, Lobster Bisque and Shrimp Bisque (and Crawfish Bisque and...) don't hold much interest to me, and therefore for the soup feast I set upon a very bright and flavorful soup, one of my personal favorites, Tomato-Basil Bisque.

This is loosely based on Tomato Soup No. 2 from the White House Cook Book, as well as Tomato Soup from Fifty Soups.


Place over the fire a quart of peeled tomatoes, stew them soft with a pinch of soda. Strain it so that no seeds remain, set it over the fire again, and add a quart of hot boiled milk; season with salt and pepper, a piece of butter the size of an egg, add three tablespoons of rolled cracker, and serve hot.


Tomato Soup.—Cut four ounces of ham into dice; slice two onions, and fry with ham in two ounces of butter; when browned turn them into a saucepan containing three quarts of stock or corned-beef water, and add three carrots, two turnips, and one long red pepper, and a dozen outer stalks of celery. Simmer gently for one hour; then add a quart of canned tomatoes; boil gently for another hour; rub the whole through a sieve, and simmer again with the liquor a few minutes; add salt, and serve with fried bread crumbs.

Both are simple; from Fifty Soups, we see more development of flavors and more vegetables, but also the use of ham, which I seek to avoid here—I aim to make this dish vegetarian, after all. In the White House Cook Book, we see an old-fashioned approach—that is, put everything in a pot and cook it—and while that is less interesting to me, the enriching of the soup with butter and milk is notable. Finishing soups with cream or butter is a very common way of enriching the soup,

1. Heat olive oil in a 5-quart saucepot. Sauté the onion until soft, and add the garlic. Sauté for another minute or two.

2. Add the tomatoes and basil, and cook until soft and starting to lose their structural integrity. Season well with salt and pepper. Strain through a sieve, pushing the tomatoes and onions through to break them down. (Alternatively, you may use an immersion blender.) Add any remaining solids back to the pan, and add the water.

3. Simmer 15-20 minutes, and purée with an immersion blender, food mill, or another run through the sieve.

4. Add the cream slowly, bring to a simmer, and test for seasoning. If the soup is too thin in texture, add a thickener such as corn starch, beurre manié, or a roux.

Note: If you use chicken stock for this soup, it will be more flavorful... at least to the palate of someone who eats meat.

2. Melt the butter in a small saucepan. Take a handful of garlic cloves (let's say 8 or so,) mince well (or food process into paste) and add them to the butter. Cook over low heat until very aromatic. The butter should taste like garlic.

3. Brush the baguette slices with the garlic butter. Toast under a broiler or in a hot oven until just starting to brown. Top with the Parmesan cheese, and return to the oven just to melt the cheese. Cool and store until service.

For service, I set one crouton on the top of the Tomato-Basil Bisque. If you set it lightly enough and are gentle in handling the bowl, it will float... and be delicious as it slowly absorbs the soup.
Posted by Aaron at 10:00 AM