In The Italian Cook Book from 1919, the following entry appears for asparagus:


Asparagus can be prepared in many different ways, but the simplest and best is that of boiling them and serving them seasoned with olive oil and vinegar or lemon juice. However there are other ways as, for instance, the following: Put them whole to brown a little with the green part in butter and, after seasoning them with salt, pepper and a pinch of grated cheese, pour over the melted butter when it is browned. Or else divide the white from the green part and place them as follows in a fireproof plate: Dust the bottom with grated cheese and dispose over the points of the asparagus one near the other; season with salt, pepper, grated cheese and little pieces of butter. Make another layer of asparagus and, seasoning in the same way, continue until you have them. Be moderate in the seasoning. Cross the layers of asparagus like a trestle, put on the oven and keep until the seasoning, is melted. Serve hot.

If you have some brown stock, parboil them first and complete the cooking with brown stock, adding a little bust and dusting moderately with grated cheese.

In every other cook book, from Mrs. Beeton to Buckeye Cookery, asparagus is suggested to be served boiled and laid on toast—so I combined the two ideas, and served seared asparagus (similar enough to broiling for my purposes) with lemon and olive oil on a toast point... and then added a little grated cheese. 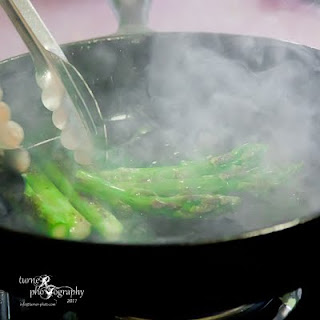 1. Heat a cast-iron skillet over medium-high heat with a small amount of oil in it. Chop asparagus spears in half at the midpoint, and when the skillet is hot—the oil should begin to smoke slightly—, add them.

2. When the asparagus has slightly browned on one side, roll the spears and brown them a bit further on another side.

3. Toss the browned asparagus spears with the oil and lemon juice listed in the recipe, add salt and pepper, and arrange 6 pieces (3 spears) on one half of a slice of the toast. Pour the remaining dressing over the asparagus, and sprinkle with the cheese. (See the picture at the top of the post.)