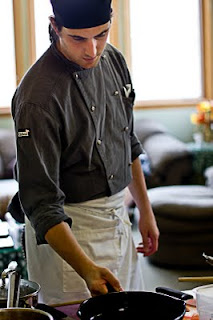 Not every weekend is a convention for the Steampunk Chef—though in the future that might change. This past weekend, however, I was at an art show in Farmington, MI, a short drive away from my home in Detroit. I had a table to work with, and was asked to do two items. I ended up deciding to work with the idea of a vegetarian item and a meat item, both of which I could make in one pot or pan.

That pound of curry powder is burning a hole in my cupboard (though it's rather mild in flavor, oddly enough) and so I set upon the idea of doing some kind of meat curry—chicken being inexpensive and rather widely-accepted, I put that atop my list for marketing. Now, a curry is always best served in a traditional manner, atop a bed of rice, so my favorite boiled rice was set to accompany the curry.

As for vegetables, I was a little more free-form. As I wandered through Eastern Market in the morning on Saturday, I spied bunches of fresh asparagus, advertised as having been picked at 10 AM on Friday. The same vendor had some lovely lemons, so I quickly decided on the idea of searing the Asparagus and serving it on a toast point with a vinaigrette of lemon juice and olive oil, and topping that with some shredded Parmesan cheese. Recipes to follow!

Email ThisBlogThis!Share to TwitterShare to FacebookShare to Pinterest
Labels: blather