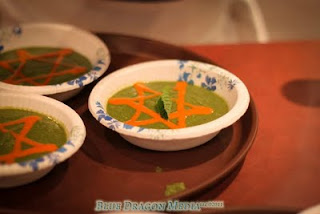 Much like Chicken Soup, there are myriad variations on the Potage Printanier; Technically speaking, the name merely means "Springtime Soup" and therefore can be made with any number of springtime vegetables, generally resulting in a green, semi-thick soup. Typically it includes peas as a main ingredient. Some recipes will have it merely be a puréed pea soup; others include lettuce and greens; others include asparagus and haricots, and many include egg. It's all a matter of whose cook book you use.

Mrs. Beeton supplies us with a recipe for Potage Printanier, as follows:


Ingredients.—1/2 a pint green peas, a little chervil, 2 shredded lettuces, 2 onions, a very small bunch of parsley, 2 oz butter, the yolks of 3 eggs, 1 pint water, seasoning to taste, 2 quarts medium stock.
Mode.—Put in a clean stewpan the chervil, lettuces, onions, parsley, and butter, to 1 pint water, and simmer till tender. Season with salt and pepper. Strain the vegetables and put two-thirds of the liquor thy were boil in to the stock. Beat up the yolks of the eggs with the other third, give it a toss over the fire, and add, with the vegetables that have been strained off, to the soup.

The White House Cook Book (my edition from 1926) provides a nearly-identical recipe for "Spring Vegetable Soup":


Half pint green peas, two shredded lettuces, one onion, a small bunch of parsley, two tablespoonfuls butter, the yolks of three eggs, one pint of water, one and a half quarts of soup stock.
Put in a stewpan the lettuce, onion, parsley and butter, with one pint of water, and let them simmer till tender. Season with salt and pepper. When done, strain off the vegetables, and put two-thirds of the liquor with the stock. Beat up the yolks of the eggs with the other third, toss it over the fire, and at the moment of serving add this with the vegetables to the strained-off soup.

Clearly plagiarism concerns were not as rampant in the age of steam as they are now. Regardless, the recipe is for what amounts to a slightly-thickened broth with cooked vegetables floating in it—nice, but not quite up to the standard of elegance I desire for this dish.

Fifty Soups, from 1884, provides this recipe:


Spring Soup.—Take two quarts of nicely seasoned veal stock; place it on the range to keep hot, but not to boil. Cut into neat strips four young carrots, four young spring turnips, and two spring leeks; add them to the stock. Now add half a pint of fresh green peas; boil gently for fifteen minutes; taste for seasoning, and serve.

Strikingly different from the other two with the use of leeks, turnips, and carrots in addition to the peas (which, as mentioned, tend to be omnipresent.) Here, as well, the "soup stock" called for in the previous two recipes is named as a veal stock—in Mrs. Beeton, it's a mixed stock using beef, veal, turkey or chicken, and ham.

In New Vegetarian Dishes, from 1892, we find this recipe:


Fresh Green Pea Soup.
2 pints of shelled green peas.
1 ounce butter.
A handful of mint.
1 cabbage lettuce.
3 pints of water.
1½ teaspoons of salt.
1 onion.
1 lump of sugar.
Dissolve the butter in a large saucepan and place in the peas, the onion sliced, the lettuce and mint thoroughly washed, the water, salt, and sugar. Boil for one and a half hours, strain through a wire sieve, rubbing the peas through with a wooden spoon.

Notable here is the fact that the soup is a purée (well, a "strained" soup, but the end result is the same) and, of course, that it is entirely vegetarian. Whether it tastes good or not, I can't say—the mint is an interesting addition, and I suspect the cabbage would strongly influence the flavor in a somewhat unsatisfactory manner.

Finally, I present a recipe of entirely modern provenance. It's from Chef Kevin Enright (CEC/CCE/AAC.)

A much more modern approach to the soup in some ways, and yet it's awfully similar to the recipes above. The lettuce or cabbage is replaced with spinach, and a full white mirepoix (onion/celery/leek) is used. In addition, the flavors are developed more fully with a more modern approach to the soup—instead of putting everything in a pot and boiling it, there's a step-by-step process of cooking each ingredient in a sequence, so as to allow the best flavors to mingle.

Finally, then, a definitive recipe for my soup:

1. Heat olive oil in a large saucepan, and add onions and leeks. Sauté until softened, then add celery. Sauté 2-3 minutes, and add the spinach.

2. When the spinach has wilted completely, add the peas and mint leaves (torn up slightly) and sauté lightly. Add a pinch of salt, then add about 1 cup (237 ml) of chicken stock, cover, and cook until everything is softened, maybe 10 minutes.

3. Purée with an immersion blender, food mill, or by forcing the soup through a strainer. Add chicken stock (or water) to attain desired thickness, test and adjust seasonings, and serve. 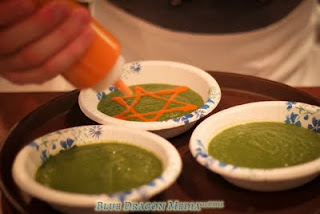 1. Place carrot juice in a saucepan. Cook to reduce by one-half.
2. Add heavy cream and cook until thickened slightly. Add corn starch slurry if needed, cooking the starch fully to ensure proper thickening.
3. Swirl in butter, and set aside to hold, warm, until service.

For serving this soup, I ladled the green soup into a bowl, and topped it with a design drawn in carrot coulis. (It should float if you're gentle in applying it.)
Posted by Aaron at 10:00 AM