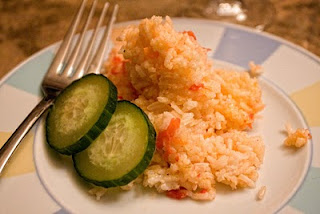 Ozzy says: "My family doesn't usually make anything like this, but I've encountered it before in Turkey." Our version is "made with a sauteed mixture of roma tomatoes and onion, mixed with white rice, and garnished with fresh cucumber." It's somewhat stickier than the traditional rice pilaf, but the texture and flavor are smooth and satisfying.

In our dinner, the pilaf served a similar purpose to a salad in a classical French meal—it helps cleanse the palate between flavorful first courses and the flavorful main dish; the cucumber is an unexpected but delightful addition to this palate-cleansing power, cooling the tongue and allowing for careful, considered enjoyment of the dish.

Simple and delicious—and, to tell you a secret: you could serve the entrée on top of this pilaf if you wanted to. 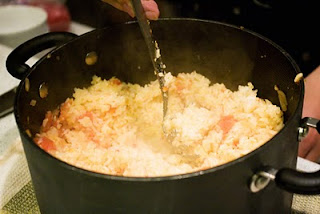 Yield: about 3 cups of pilaf


1. Bring the water to a boil in a stockpot large enough to hold the finished pilaf (which will roughly triple in volume.)

2. Heat 1 tablespoon/15 ml of olive oil in a sauté pan over medium-high heat. Once the water is nearing a boil, place the rice in the oil and stir to coat the rice. Do not toast the rice more than necessary. Once the water has come to a boil, pour the rice in, add the butter, stir once, cover, and simmer until the rice is done cooking—all the water will have been absorbed. This usually takes only 15 minutes or so.

3. Meanwhile, heat the second portion of olive oil in a sauté pan over medium-high heat, and add the tomatoes and onions. Sauté until the tomatoes are tender and the onions are translucent.

4. When the rice is done cooking, uncover it and allow it to vent—toss the rice gently with a fork to separate the grains and allow steam to escape. Add the sautéed tomatoes and onions and mix gently again. Season with salt, pepper, and any other desired seasonings. (Again, sumac is a traditional choice, as is paprika.) Serve with slices of cucumber on the side—it's a surprisingly good combination.
Posted by Aaron at 11:00 AM