Mrs. Beeton prescribes this combination of dishes in her book, and as I am from time to time inclined to take a cook-book writer at their word, I have elected to prepare the dishes exactly as she sets forth.

Exactly, that is, with the exception of any tweaks I might need to make to render the dishes delicious, edible, and suitable for the palates (and diets) of my friends. Mrs. Beeton leaves quite a bit un-said, you see, about the proper manners of cooking; there is much that must be read between the lines of her work, that must be assumed or implied or otherwise added to the simple recipes she provides.

A nice dinner is never amiss, however, and since I'm at home I might as well prepare something that everyone will enjoy—and that will serve as an opportunity to perfect these historical recipes for later use. After all, while half of cooking is creativity, the other half is replication. A dish is no good if I can't make it again the same way.


Score the skin in strips rather more than 1/4 inch apart, and place the joint at a good distance from the fire, on account of the crackling, which would harden before the meat would be heated through, were it placed too near. If very lean, it should be rubbed over with a little salad-oil, and kept well basted. Pork should be thoroughly cooked, but not dry. Serve with apple sauce, and a little gravy made in the dripping-pan. A stuffing of sage and onion may be made separately, and baked in a flat dish.

Obviously, it is rare in our time to roast a piece of meat by a fire, so Mrs. Beeton's admonitions about roast placement are somewhat useless. It is also worth noting that nowadays, a pork loin roast is usually sold boneless and trimmed, so that there is very little fat and no bones, skin, or extraneous meat attached—this both adjusts the cooking time and also the initial bits of the instructions—in other words, the changes in butchering and technology have rendered Mrs. Beeton's recipe little more than a suggestion of what to serve with what. 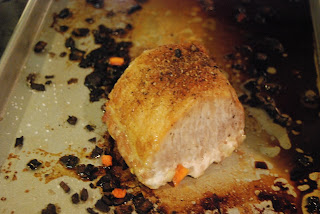 
Allow the meat to come to room temperature before cooking; don't leave it out for too long—30-45 minutes should suffice if you're removing it from a refrigerator. Season the roast well with salt and pepper, and place on a roasting rack.

Roasting pork is not a difficult thing—place it in an oven at about 450°F/230°C/Gas Mark 8; cook briefly to develop a nicely browned exterior. Turn the oven down to 300°F/150°C/Gas Mark 2, and roast until the internal temperature is 145°F/63°C (for a slightly pink in the center roast; if you like yours done further, keep cooking 'til about 155°F/68°C.) This can take anywhere upwards of an hour to accomplish, depending on the size of the pork loin.

Remove from the oven, and allow it to rest for about 5 minutes (minimum) before carving, to let the juices re-distribute. Slice into 1/8"-1/4" (3-6 mm) slices, and serve.


Ingredients. — 4 large onions, 10 sage-leaves, 1/4 lb bread crumbs, 1 1/2 oz butter, salt and pepper, 1 egg.
Mode. — Peel the onions, put them into boiling water, simmer for 5 minutes, or rather longer, and put in the sage leaves for a minute or two to take off their rawness. Chop both very fine, add the bread, seasoning, and butter, and work the whole together with the yolk of an egg, when the stuffing will be ready for use. It should be rather highly seasoned, and the sage leaves finely chopped. May cooks do not parboil the onions, but use them raw. The stuffing then is not so mild.

As recommended in the pork recipe, I will then bake this stuffing in a pan and use it as a side to the pork loin. I have also elected to add some more vegetables to the stuffing, to create a better flavor profile. 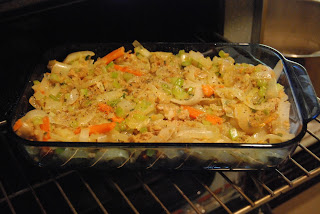 1. Heat the melted butter in a sauté pan large enough to hold all the vegetables, and sauté onions until they begin to soften. Add garlic, continue to sauté a further two to three minutes. Add celery, carrots, and sage, and continue sautéeing until the vegetables are tender, and the onions soft and sweet.

2. Mix bread crumbs, whole butter, vegetables, and egg in a bowl. Pour into a greased baking dish large enough to hold it evenly, and bake until browned on the top and warmed through.

* For fresh bread crumbs, take sliced bread, cut off the crusts, and weigh out to slightly more than called for. Place in a food processor, and pulse until there are no more large chunks of bread remaining.

To be honest, as much as I like onions this particular recipe is a little strange. I'd prefer it to be something... different. It could work as a stuffing, but as a dressing/side dish, I find it a little lacking. The onions are sweet but not caramelized. The bread crumbs are there, but not enough to make it the bready stuffing I am familiar with, nor are they subtle enough to be ignored. I may also have affected the recipe by slicing the onions rather than dicing them as originally described. This recipe will be re-visited in the future, I suspect. (Note: My father is actually trying it tomorrow, to be served with a smoked turkey.)


Ingredients. — 6 good-sized apples, sifted sugar to taste, a piece of butter the size of a walnut, water.
Mode. — Pare, core, and quarter the apples; throw them into cold water to preserve their whiteness. Put them in a saucepan with sufficient water to moisten, and boil till soft enough to pulp. Beat them up, adding sugar and a small piece of butter.

Simple, and more or less what I did for the applesauce in the Hanukkah Dinner. I like that recipe's substitution of apple cider for the water—I find it gives a better finished flavor—and the addition of cinnamon and Southern Comfort was welcome. Otherwise, though, the recipe is almost identical. No surprises here. For the sake of completeness, I present it to you again here:

1.) Peel, core, and quarter the apples. Combine all ingredients in a stockpot—this will all fit easily in an 8-quart/8 liter pot.

2.) Simmer gently for 20 minutes or until the apples are tender. Mix occasionally during the cooking.

3.) Using a potato masher, an immersion blender, or a food mill (or a combination thereof) break down the apples into a smooth sauce. Some texture should persist, but there shouldn't be big lumps.

The recipes presented here may not match the pictures exactly—the pictures come from a small dinner with friends, where I forgot to photograph the final plates as is my usual habit.
Posted by Aaron at 9:00 AM