Auguste Escoffier, master of Classical French Cuisine, had a habit of naming his dishes after people. It's not immediately clear whether these names were chosen because the dishes were inspired by the people named, created for the people named, or merely associated with them by Escoffier to make a splash on his menu: the likely answer is a combination of the three, though during his tenure as head chef at the Savoy, Ritz, and Carlton hotels (as well as nominally overseeing many other kitchens, directly or indirectly,) he most certainly did serve food to many of the people included in his Guide Culinaire.

In the grand tradition established by the king of chefs, I have named this dish in honor of my good friend Miss Kagashi, author of The Steamer's Trunk (Multiculturalism for Steampunk.) She posted the recipe I used for the base of this plate; of it, she writes:


Majadara is a Levantine dish, dating back thousands of years. By its definition, it is a simple pilaf of rice and lentils topped with caramelized onions and was primarily eaten as "poor man's" or "working man's" food. As with most staple Middle Eastern and Mediterranean dishes, there's some squabble over where it actually originated[...], but the recipes differ country to country so it could actually be considered several separate dishes. In some places the rice is switched out for bulgar wheat, in Lebanon pine nuts and garlic yogurt are sometimes companions, and sometimes the recipe alternative between red or green lentils.

Considering what you use and the final yield, this is a fantastically cheap recipe that can be dressed up a couple of ways in good times or just eaten as is in less than fortunate ones.

As good as majadara is on its own, I chose to combine it with a few other dishes from the Mediterranean region, to create a dish delightful in its own right, and more along the lines of my typical presentation than a simple pilaf. 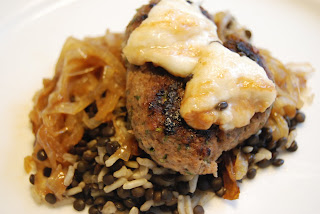 To my interpretation of Miss Kagashi's majadara recipe, I have added a piece of sautéed köfte (kefta, as some may know it) as inspired by my friend Oz (remember him from the State Dinner?) and some halloumi cheese, floured, sautéed, and flambéed with brandy. (Some may recognize this as saganaki halloumi from their local Greektown... I suppose growing up across the street from Detroit's Greektown has had some effect on me.)

This dish is somewhat labor-intensive—at the very least, it's equipment-intensive, because it uses about 5 cooking vessels, and requires some amount of time to prepare: fear not, however. With care and concentration, this dish is simple, delicious, and nutritious. 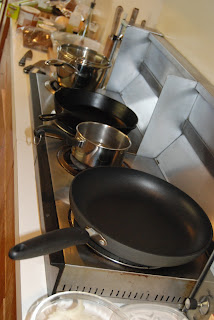 Onward to the recipes!

For my majadara, I used some black lentils that I found at my local gourmet market—it's just as good with all varieties of lentil, but I like the dark, dark brown color that these lentils yield. I've also chosen to use brown rice, since it's healthier and has a better flavor to it.

1. Slice up your onions and set them aside. You'll want to get this out of the way first, because there's a lot of onion to slice and doing it on the fly is always hard. Reserve the other half of one onion for use in the köfte.

2. Rinse the brown rice, and soak it in one or two changes of water for an hour total. Place in a saucepan with 1 cup (236 ml) of stock. Bring to a boil, then reduce to a slight simmer, and simmer, covered, for 45 minutes (or until the water is absorbed and the rice is very slightly al dente.)

3. After sorting and rinsing your lentils, place them in a small saucepan and cover with 1-2 inches of stock; depending on your lentils and pan this may end up being as much as 2 cups (473 ml.) Add the cumin and nutmeg. Bring to a boil, and as soon as your pot boils, reduce it to a simmer and allow the lentils to simmer, very gently, until tender but not mushy.

4. Heat your fat of choice (I used 100% olive oil) in a sauté pan (I used a cast-iron skillet, for optimum browning) over medium-high heat. When shimmering, place your onions in the pan and begin to cook, stirring frequently, until they have reduced to a candy-like sweetness and medium brown color. Some may begin to get crispy—don't worry, this is highly desirable. Don't let them burn, however. You may need to oscillate between medium-high and medium-low heats.

1. Mix the ground beef and ground onions together, and allow to marinate for about 15 minutes. Add in the parsley, spices, and seasonings. Cover and set in the refrigerator for at least 30 minutes.

2. Mix in breadcrumbs, a small amount at a time, until the mixture tightens up and feels somewhat dry. It will remain moist to the touch and slightly tacky, but won't have liquid dripping from it.

4. Heat a sauté pan (or grill) over medium heat, oil it lightly, and place your köfte patties in the pan. Brown, flip, and brown on the other side. Check to see that it's cooked through, and if they aren't, place in a 350°F/180°C/Gas Mark 4 oven on a sheet pan until they're cooked through.

1. Slice the halloumi and dredge it in flour. Knock off excess flour and set each piece aside.

2. Heat oil in a sauté pan, and lightly brown the halloumi on both sides.

3. Pour in about 1 fluid ounce (30 ml) of brandy into the pan, and flame! Be careful, stand back, and for the love of all that is holy, don't set your kitchen on fire.

To assemble Majadara Kagashi, place about 1 cup (236 ml) of majadara on a plate, top with the caramelized onions, place a köfte piece on top of that, and finish with the saganaki halloumi.