Colcannon, Champ, and the Potato 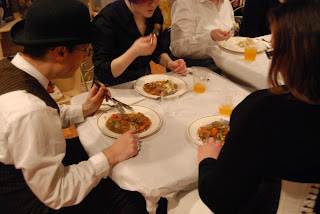 Sometimes, the best things in life are the simplest. A delightful meal with friends, a beautiful snowstorm, the sunset at the end of a summer's day, or the potato.
Seriously—the potato is simply wonderful, useful in a variety of manners, able to be prepared into any number of dishes—from appetizer to dessert—in any number of ways. Think of the pervasiveness of the potato: we eat them in myriad manners, from potato breads and biscuits to chips (crisps) and fries (chips.) We bake them, roast them, boil them, cook them sous vide, sauté them, simmer them, and make them into confit; we smash them, eat them whole, peel them, save the skins and serve with bacon and sour cream, and cover them in mayonnaise or hot bacon dressing. I use potatoes to thicken the occasional item, like my garlic sauce, and can put them in soups for a similar effect—not to mention the ever-popular loaded potato soup, and their presence in chowders.
Ireland has not always been the beautiful, idyllic place we think of it as. For a great deal of its recent history, Ireland was exploited thoroughly by England, which used Ireland as a convenient place to produce food for English consumption.

When food left the shores of Ireland, and the vast majority of the population dwelt in abject poverty, good food was hard to come by—so the potato, which could be grown in poor soil and yield plenty, took its place as the primary sustenance for most of the residents of Ireland.
Most know the story of the potato blight, a disease that wiped out the potato crop between 1845 and 1852. Mass starvation led to death—around one million people died—and emigration, spreading the Irish love for potatoes across the world and creating a diaspora that has fostered St. Patrick's day celebrations across the world.

Potatoes come in two general varieties: Waxy and Mealy. Mealy potatoes, for my American readers, are what we know as Russets or Iowa potatoes: A rough, dark brown exterior and a texture that feels rough to the touch when peeled, but, when cooked, becomes light and fluffy. Waxy potatoes are redskins, Yukon Golds, and most fingerlings—they have a higher moisture content, feel smooth when peeled and stay smooth when cooked. Waxy potatoes are generally known as "Boiler potatoes" while mealy potatoes are "baker potatoes," so named due to the common cooking methods for each type. They can, of course, cross over successfully to some extent: Waxy potatoes can be cut and roasted to create a dry, crisp exterior; mealy potatoes can be boiled and used to create sautéed dishes or served as boiled potatoes, plain; and, both waxy and mealy potatoes can be boiled (or steamed) and used for mashed potatoes, relevant to our recipes today.
Colcannon and Champ are two similar and typically Irish uses for potatoes. They both take boiled potatoes, mash them with butter, cream (or milk,) salt, and pepper, and then add something extra for flavor and color. Colcannon adds kale or cabbage and onion, while Champ uses green onions steeped in the milk and cream.
Colcannon
1 lb (454 g) potatoes, waxy or mealy, peeled and cut into equal-sized pieces
heavy cream as needed, at room temperature
2 Tbsp (30 ml) butter, melted
Salt and Freshly Ground Black Pepper, to taste
1 lb (454 g) cabbage or kale, cut into strips
1 cup (237 ml) onion, small dice
additional butter, for sautéeing
1. Place the potatoes in a pot of cold water, salt well (about 1-2 Tbsp/15-30 ml will do) and bring to a boil. When a fork easily pushes through the potato, it is done cooking. Drain the potatoes and return them to the pot. Add melted butter and cream to create delicious mashed potatoes. Salt and pepper to taste.
2. Mix in the sliced cabbage, and set aside.
3. Sauté the onions in some butter until soft, and stir these into the potato-greenery mixture.
4. Melt butter in a sauté pan big enough to hold all the potatoes, and when the butter has melted completely and is sizzling nicely, place all the potato mixture into the pan. Smooth down, and allow it to brown somewhat on the bottom.
5. With a spatula, chop up the potatoes and mix them around. Keep cooking until they are nicely browned with crispy bits in the middle, and everything is warmed through. Serve immediately.
Champ
1 lb (454 g) potatoes, waxy or mealy, peeled and cut into equal-sized pieces

2 Tbsp (30 ml) butter, melted
Salt and Freshly Ground Black Pepper, to taste
1. Place the potatoes in a pot of cold water, salt well (about 1-2 Tbsp/15-30 ml will do) and bring to a boil. When a fork easily pushes through the potato, it is done cooking. Drain the potatoes and set aside.
2. Add the butter to the pot and melt over medium-high heat. When ready, add the green onions and sweat for a couple minutes, until the green darkens and they begin to soften slightly. At this time, add the milk and heavy cream, and reduce the heat under your pot to low, and steep the green onions in the dairy for 15 minutes.
3. Return the potatoes to the pot, and mash up until creamy. Season to taste with salt, pepper, and butter. Adjust consistency with heavy cream—and bonus points for a little garlic powder in this, too.
Posted by Aaron at 1:32 AM