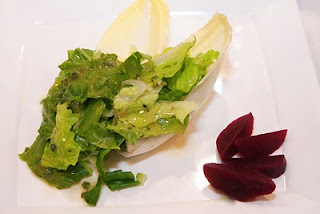 While my presentation of this dish may not quite resemble what the authors of The Practical Housekeeper (written in 1857) had in mind, the ingredients and method of preparation are more or less the same.


Coss-lettuce and blanched endive make the best salad, the green leaves being stripped off, and leaving nothing but the close, white hearts, which, after being washed and placed for an hour or two in cold water, should be wiped quite dry. To this should be added a head or two of celery, a couple of anchovies (which are far preferable to the essence), and several chives, or young onions, all cut small, while the lettuces should be divided lengthwise into quarters, and cut into rather large pieces.

Generally speaking, blanching endive isn't done much these days, since it's now commonly used as a liner item, the base of a salad plate, and not necessarily a primary component of the salad itself.
In regards to dressing, the book says:

The mixture or dressing.--For four persons bruise only the yolk of one hard-boiled egg (leaving out altogether the white), with some salt, and make it into a paste with two large teaspoonfuls of moûtarde de maille. Then add oil and vinegar in the following proportions, without using so much as to make the sauce thin, and taking care to have the finest Provence or Lucca oil, and the very strongest species of real French vinegar: namely, to every one spoonful of vinegar add two of oil. A little tarragon may be an improvement.


The recipe here is surprisingly similar to modern formulas for salad dressing, though the proportion of oil to vinegar commonly called for nowadays is 3 parts oil to 1 part vinegar—otherwise, mixing in Dijon mustard and tarragon is somewhat common—the egg yolk is an interesting touch.


When this is done, mix the sauce well, but lightly, with the salad, to which a few slices of boiled beet-root, and the white of the egg sliced, will be a pretty addition.

The excellence of a salad consists in the vegetables being young and fresh, and they should be prepared only a short  time before they are wanted; the salad mixture being either poured into the bottom of the bowl or sent up in a sauce tureen, and not stirred up with the vegetables until they are served.

It's interesting to note the instructions on dressing the salad that are provided. In summer, one set are given, which consist of pouring the dressing in the serving dish then placing the salad over it.


In winter salads, however, the reverse of this proceeding must be adopted, as thus: the salad of endive, celery, beet, and other roots being cut ready for dressing, then pour the mixture upon the ingredients, and stir them well up, so that every portion may receive its benefit.

In other words, only in winter should you serve a tossed salad, apparently.

1. Chop Romaine lettuce leaves, and soak in ice-cold water for 15-20 minutes. Swish around to loosen any dirt or grit in the leaves, then dry in a salad spinner and set in a refrigerator or ice-box to crisp it.
2. Pull Belgian endive apart, leaving each leaf whole, and soak leaves in cold water for 5-10 minutes, cleaning out any grit or dirt. Dry gently in a salad spinner, place in refrigerator to crisp.
3. Combine Dijon mustard, vinegar, salt, pepper, and tarragon, and mix well. Allow the flavors to mingle for 10-15 minutes, then whisk in the oil in a thin stream, ensuring that an emulsion forms. Set aside.
4. Toss together the romaine, celery, and green onions. Dress lightly with the vinaigrette.
5. Set out a few leaves of endive, a handful of the romaine mixture, and one beet (quartered) onto your plates. Serve!
Posted by Aaron at 10:00 AM