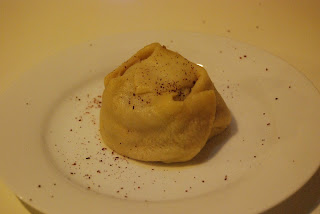 Mantı are a popular dish in Central Asia and the Middle East. Depending on where you find them, their exact shape and size vary, but in many respects they are similar in fashion to Baozi. The main difference is that while Baozi are made with a yeast dough, Mantı are made with something much closer to a pasta dough. Both dishes are steamed, however, making them quite similar in function and in creation, if not in form.

Mantı are typically filled with a beef or lamb mixture, similar to the boreks from earlier, and steamed until the dough wrapper and the ground meat inside are cooked. Many regional varieties exist, as the dish spread across its geographic area with nomadic tribes. Most are served with a yogurt-garlic sauce, sometimes with sumac, hot red pepper powder, or dried mint, sometimes with other sauces and spices.

Pasta dough is a simple item to prepare. Simple by hand, and simpler by utilizing some kind of mechanism like a food processor or electric mixer. There are four ingredients:

Sometimes, if there is a need for additional moisture in the dough, a small amount of water can be added.

A filling for this dumpling can be made in any number of styles. I have found recipes for everything from beef to pumpkin manti. Potatoes, rice, vegetables, and a variety of spices are added to or substituted for the ground meat that is traditionally the filling; the one constant seems to be minced onion.

1. Mix dough by placing eggs, salt, water, and oil in the bowl of a food processor; pulse briefly to mix, then begin adding flour by four additions, processing then adding more flour each time. Once all flour is in, process until the dough looks like cous-cous, and is warm. (You may also make the dough by hand, or in a stand mixer. Directions are available for both methods online, but the general concept remains the same: combine all ingredients until elsastic and smooth.
2. Turn it out onto a floured counter, and knead until elastic and smooth. Set aside and rest for 20 minutes, minimum.
3. Combine onion (including its juices,) ground beef, spices, and seasonings, and mix well. Set aside to chill in the refrigerator for 15 to 20 minutes.
4. Roll out the dough to a thickness of just less than 1/8 inch (2-3 mm). Cut into 4.5 inch squares.
5. Place about 2 tablespoons (30 ml) of filling in each square.
6. Fold up in the following manner:
a. Opposite corners together
b. Adjacent corners together

7. Arrange on a steamer tray, with roughly 1/2 inch (1.25 cm) between the mantı, and place over boiling water. Steam for roughly 15-25 minutes, or until the center of the meat mixture registers 165°F/74°C on a thermometer. Going above that temperature is not an issue, but since it's ground meat that you've been working with, you don't want to go too far below it.

8. Remove dumplings from steamer and set to rest for 5 minutes. If you cut into them right away, all the liquid inside will run out, and you'd prefer that it be re-absorbed into the meat filling.

9. Serve sprinkled with black pepper, sumac, or paprika (or a combination thereof) with your choice of sauces—I prefer the yogurt-garlic sauce, but I suspect our old friend paprika butter would be delicious, too.

I made a sauce for some left-over filling (which I formed into patties and sautéd,) the said sauce consisting of about a pint-and-a-half to a quart of quartered grape tomatoes, half a large onion medium diced, some olive oil, a clove of garlic, hot and sweet paprika, salt, black pepper, oregano, sumac, and fresh lemon juice. I didn't really measure anything, so much as add here and there. I first began by sautéing the onions over high heat, then, when they were softened and translucent, added the tomatoes. I reduced the heat to a medium-high state, and continued cooking. When those got soft enough to slough their skins, I began seasoning and cooking them down. I added the lemon juice last. Season to taste at the end, and if necessary cook further to get the flavors right. I didn't take any pictures, sadly, because it was just so tasty that it didn't last long enough to be photographed.
Posted by Aaron at 10:00 AM