Brisket is a cut of meat that crops up often in Jewish cooking. There's many reasons for this, both economic and cultural. 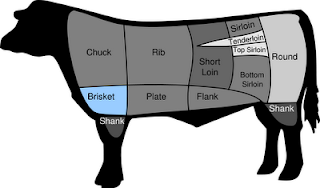 Brisket is cut from the foresaddle of beef—meaning that it comes from the front half of the cow. It's typically a rather tough cut, because of being the cow's well-used pectoral muscles—this also, however, gives the meat more flavor than, say, the tenderloin, which is minimally worked, and therefore very tender and flavorless. In Kosher law, all sciatic nerve tissue must be removed from meat to make it Kosher. Because the sciatic nerve is very difficult to remove, meat from the hindsaddle (back half of the cow) was often not used by kosher households, to stay on the safe side of Kashrus. The "low quality" of the brisket and its kosher status (being from the foresaddle) made it a very common choice in the poor Eastern European Jewish households that developed what we today consider "Jewish Food."

Because it is so tough, brisket is usually subjected to some form of long cooking, whether braising as a pot roast or simmering as a corned beef/pastrami, or Barbecuing in the American tradition—which I highly recommend and will likely discuss at a later date. In many Jewish households, the idea of slow, long cooking was particularly suitable for Sabbath meals, where you could begin cooking something on Friday before sundown, and without adjusting or tweaking, allow it to cook all day Saturday until sundown, when the prohibition on work (which includes many cooking procedures) expired. A good hot meal on Saturday was the goal of most Jewish mothers, and so Brisket became prominent as a dish for Shabbes, and from there for other holidays where large groups would be fed, like Passover or Rosh Hashanah.

2. Cover the brisket with chopped onions and carrots, and add liquid to come up about 3/4 of the way of the contents of the pan. Cover the pan, and bake in a low oven (250°F/120°C/Gas Mark 1/2) for many hours until the meat is tender.

3. Cool the brisket, and remove it from the pan. Slice against the grain into 1/4-to-1/2 inch/approx. 1 cm slices, and place these in a pan, slightly shingled. Pour the juices and vegetables from the first cooking over the brisket, and re-heat at 250°F/120°/Gas Mark 1/2 or less for an hour or more. Serve plain or with the pan juices. The brisket ought to fall apart at this point—that's how you know it's good.

This may be considered a starting point for your particular version of braised brisket. My friend Red, who made the brisket for the Hanukkah meal, uses chili sauce and beer as her liquid, and also adds some other seasonings to the mix. I keep mine simple, to highlight the flavor of the beef. Others will add a full mirepoix, other vegetables, and so on. It's a blank canvas, so explore it.

1. Place the fat in a large sauté pan (I use a sautoir) and warm it over medium-high heat.

2. Place the onions in the pan and sweat until they are tender, then reduce the heat to medium.

3. Allow the onions to cook slowly, stirring only occasionally, until they begin to brown through and through.

Photographs of the Hanukkah Dinner by Mark Moore of Pict Studios and Lance Sabbag of Through This Lens Photography.
Posted by Aaron at 11:00 AM